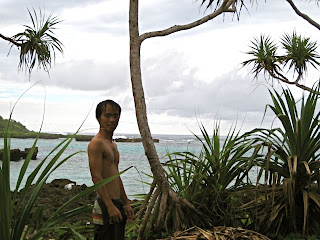 Well, Vanuatu was absolutely amazing! But the journey here started a bit rough. When I got to the airport in Wellington, New Zealand, they said my luggage was overweight by 22 kg and the cost was $10/kg, so I would have to pay $220! My friends had already left the airport, so I couldn’t give stuff for them to take away. Long story short I ended up paying $65 because my first flight was domestic. I got to Auckland and spent the night there, and gave a bunch of stuff away to the Salvation Army. When I checked in to Auckland Airport the next morning, they said my stuff was still overweight, and asked me to open my suitcase and start taking stuff out. So after throwing a bunch of clothes onto the scale, the lady said I could put it back in, cause she just realized that since I was continuing on to another country and not going straight back to NZ, I was allowed more weight. I don’t know, but it was a big mess.
Vanuatu is soooo hot and humid! The last time I was in this climate was 7 years ago in Panama. It’s a group of 82 islands north of New Zealand. A few speak English and French, most speak Bislama/Pidgeon, which is a mix of the two, sounds kinda like Carribean pirate talk. And they all have their own tribal dialects. I got there Sunday morning and spent the afternoon walking along the beach and going in the water. The water was incredibly warm! I seriously felt like someone peed in the ocean. The entire ocean. It was really difficult to sleep at nights though. I booked a fan-cooled room at a budget motel, trying to save money and thinking I could easily take the heat. No way. It took hours of lying naked on the bed and sweating before I could fall asleep. I just couldn’t believe how hot the nights were. And I have this theory about ceiling fans. If hot air rises, wouldn’t they just be blowing it back down, and thus defeat the purpose? 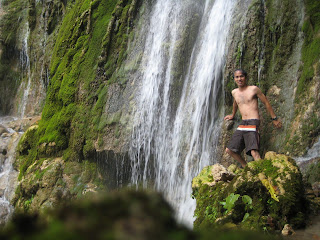 The next day (Monday) I did the tourist thing and went on a group tour. We drove around the island and stopped at a few places here and there. It was quite enjoyable. Our last stop was the best though. It was this hike up to a cascade-type waterfall. It broke into all these different cascades and there were so many different natural pools to swim in. When you hike back from the waterfalls, they give you coffee and biscuits. Perfection. 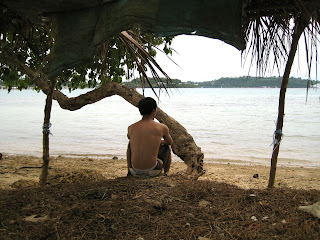 The last morning (Tuesday), I went out to a tiny island and just spent some hours on the beach, which was really relaxing, then took a taxi to the airport. I felt really embarrassed travelling with my gigantic suitcase and guitar. It’s only so much stuff because it’s my entire year in New Zealand, but everyone probably thinks I’m one of those rich snobby tourists that takes all their crap with them for only a few days. I definitely got there too early. Vanuatu is one of those less known destinations. From the two hours that I waited at the airport, only one flight came in: mine. Which explains how the counter lady knew my destination before I even said anything. They had one departure gate. When we walked out onto the airstrip to board the plane, there were no other big planes around…only little propeller ones to get between the islands. Being an airport tower controller in Vanuatu would be a kick-back job compared to something like LAX.
I had mixed feelings about this whole tourist thing. I haven’t really been a tourist in a long time. For the past several years going to developing countries, I was always doing some kind of school, orphanage or church work. And living in a village, I always despised the tourists who would drive by in their tour vans and take pictures from inside without getting out to know the people. I felt in a way that I had earned my place among the locals, and was contributing more to their well-being. But now being on the other side, I also realize how much these countries depend on tourism. It’s a major export, just like crops or minerals. Without tourists, the economy would collapse. They perhaps need tourists more than they need volunteer workers. Yet the struggle I have is the global class separation it creates (yes, it sounds really Marxist). Take for example a poster for a Vanuatu resort. It shows a beautiful white woman in a bikini sunbathing on the beach. Behind her is an average looking Vanuatu lady in full clothing with a tray and a glass, waiting to serve her. I know that’s how tourism and vacations work, but the problem in developing countries is that those roles will never be reversed. Someone working in a hotel in the U.S. has the opportunity to be a tourist somewhere and be served, or even just stay as a guest in another hotel. But the Vanuatu hotel worker will never have that opportunity. In developing countries, the white tourist will always be in an elevated class, made apparent by the hotels they stay in and the money they spend. And the locals, though they need the tourists to sustain their economy, I can only imagine the disdain that some of them will feel towards the wealth that tourists have and the elite class they represent. It’s a global caste system of pre-defined roles. Westerners have the freedom to travel the world and be served, people in developing countries must stay where they are and serve, and those boundaries are rarely crossed.
Just something to think about. Well, now I’m in Fiji and continuing my mini-vacation as the wealthy tourist. Oh, the irony of it all. 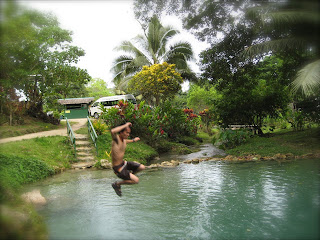 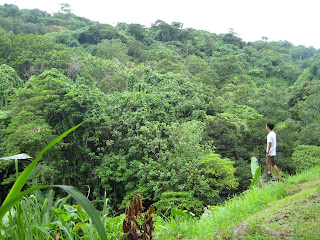