At around 9pm, I stood in the international terminal of LAX with a group of people I hardly knew. Some I had just met that evening. But they were my people, my tribe.

In nervous anticipation, we scanned the crowds looking for the people we were waiting for. The only problem was we didn’t really know who we were looking for. We had never seen these people either.

Then we saw them, and we knew. A Southeast Asian woman wearing a hijab and carrying an infant baby. Two young boys followed behind her pulling large suitcases. Then a man came last, pushing a cart of suitcases and bags.

They were exhausted, but out of our slight over-excitement, we smiled and cheered and held up our welcome signs, then eagerly handed them balloons, flowers, and packaged gifts.

We were a team from Mosaic, a church in Los Angeles, there to welcome a Muslim refugee family to the United States. It was a surreal moment, that night of Wednesday, November 9, 2016. The previous day, our nation had just elected a president who campaigned on banning Muslim refugees from entering the US, and who would later order such bans.

Over the next few months, we helped this family get adjusted to their new life in Los Angeles. So who are these people, that so many Americans would hate so much, but that we chose to help?

The Most Persecuted People On Earth

The Rohingya are an ethnic Muslim minority group in Myanmar. For decades they have experienced oppression from Myanmar’s military government, including being arrested, forced into work camps, and killed.

Over the past few years, violence against the Rohingya has increased. Their villages are raided and burned. Men and babies alike are killed. Women are beaten and gang raped. In 2016, the government of Myanmar increased their attacks in an ethnic cleansing fashion.

Tens of thousands have fled to neighboring countries where they continue to be marginalized. Many flee by boat, but do not make the journey alive.

With only a small population of one million, they are often called the most persecuted people on earth.

This refugee family represents a group of people that so many people have come to fear and hate. But this is the refugee family that we chose to love and help.

“We” are a group of volunteers from Mosaic, a church in Los Angeles. Last year, as a response to the Syrian refugee crisis, Mosaic created “welcome teams” that would help resettle refugee families in Los Angeles through Catholic Charities, the resettlement agency for the area. It wasn’t a political statement, it was simply responding to what we believe God called us to do – to love and help those in need.

My wife and I had the opportunity to join one these teams along with other people we didn’t know, but grew to become close friends with.

After greeting our refugee family at the airport, we spent the next couple of months helping them get adjusted to their new lives. This involved helping them find an apartment, setting up bank accounts, taking them to doctor’s appointments, registering their children for school, and an unbelievable amount of paperwork to fill out and government appointments to attend. It was difficult enough for us Americans to navigate the system, but being thrown into a new culture without knowledge of the language nor any transportation would have been near impossible.

Yet through this experience, I was able to see the goodness of people and the love God in them. I saw my team mates sacrifice their days off and even take time off work to drive our refugee family all over Los Angeles for various appointments. I saw them spend late nights at our refugee family’s apartment helping fill out paperwork. I saw people I didn’t know in our church community donate furniture, buy new furniture, buy gift cards, and give straight up cash and not expecting a tax-deductible receipt, all to help this family they’ve never met and may not ever meet. And I saw my beautiful wife driving a big U-Haul around Los Angeles picking up donations for the family.

As I saw all these people helping, not expecting any recognition or reimbursement, I found hope in the American people and in the Church. I saw people who sacrificed out the goodness inside of them, simply because it was the right thing to do.

It wasn’t about politics. It was clear to them that when people need help, you help them.

It Shouldn’t Be Political, But It Is

Helping refugees shouldn’t be a political issue, it should be a humanitarian issue. It comes down to the basic principle of helping others in need.

Yet because of a fear and misunderstanding of refugees, it’s somehow become politicized. Wanting to help refugees places you on one side of the political divide, and you’re labeled as such. And if you happen to be on the other political side, you somehow automatically have to be opposed to refugees. It’s absolutely ridiculous.

> What is a Refugee?

What’s worse is the divide that it’s caused in Christianity. Because American Christians have chosen to submit our values to the authority of a certain political party, we feel obligated to stand with that party on whatever issues they dictate. So churches fall silent on the issue or openly oppose refugees.

It’s been disheartening for myself and my team mates as we encountered opposition when we told people what we were doing. Maybe the issue resonated more with us because my own family came to the US as refugees, and my wife spent time volunteering at a refugee camp in Greece.

For my church, and for my team mates and new friends, the issue couldn’t be any simpler. God told us to love our neighbors and show hospitality to strangers, so that’s what we did.

The Bible actually goes in to a lot more detail about how to treat people. It includes caring for those in need and welcoming foreigners.

In addition to helping with all the financial and legal stuff of getting resettled in Los Angeles, we helped our refugee family get acquainted culturally. 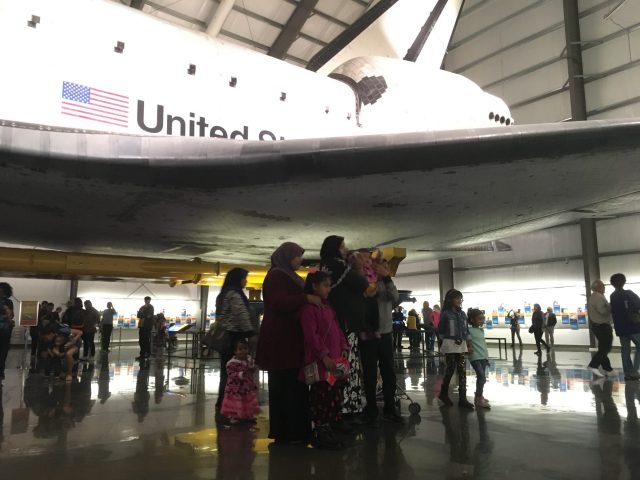 We took them on shopping trips to Target, on picnics to the beach, and to the California Science Center, a museum where they got to see an aquarium and the space shuttle Endeavor.

On our first outing, our team took our refugee family to the top of a hill that overlooks all of Los Angeles. You could see the skyscrapers of downtown LA on one end and the glistening water of the Pacific Ocean on the other end, with the backdrop of the San Gabriel mountains behind the sprawling urban landscape.

As the mother gazed out at the view with rays of sunlight peaking out through the clouds, she grabbed her sons and pointed out at the city. With a big smile on her face, she said to them, “America, America.”

It was a statement of relief and of hope. Relief that after all the dangers they survived in Myanmar and the long ordeal they faced trying to get to the US, they were finally safe. Hope that her sons and daughter have a shot at a better life than they did.

There are underlying desires in humanity that I think are universal. We all want to live in a peaceful world. We want our kids to have opportunity and live a better life than we did. Seeing that humanity in strangers made us strangers no more.

Over those months, our team developed a friendship with our refugee family. We were eager to spend time with them, and their faces lit up whenever they saw us. Even with cultural and language barriers, we communicated with emotions and expressions, and saw our refugee family gradually become more settled, more joyful, and more confident.

Our team of strangers became friends as well, as we faced challenges together and celebrated successes together. In a church of thousands of people, we make it a point to find and see each other on Sundays.

With the amount of prejudice and anger in our world, it’s refreshing to connect with another human being and realize that “we are more alike, my friends, than we are unalike.”

I guess you could say that’s the tagline of our church. Whoever you are and whatever you believe, you’re welcome here.

It’s a fitting phrase for this time. When the prevalent sentiment in the world is exclusivity and marginalization, we’re choosing to create a space where people can feel like they belong – in our community, in our city, in our nation.

This year, Mosaic has committed to continuing to help more refugee families and is forming more welcome teams, giving people the opportunity to rise up to the greatest levels of who they are by sacrificing and serving others.

Loving people and helping those in need – it’s a simple act that shouldn’t be an issue. It’s just the right thing to do.