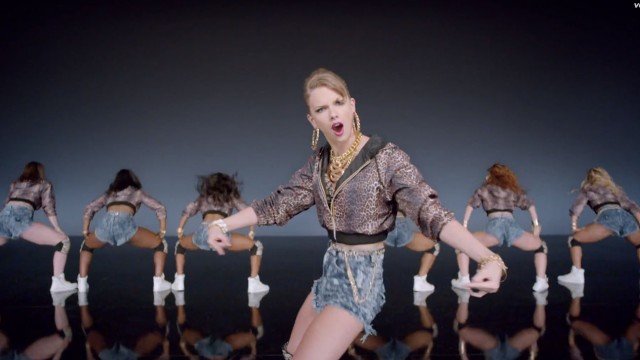 Let’s get this out on the table: I like Taylor Swift and will gladly sing along to songs that I don’t really relate to. Now that we got that out of the way, her “Shake It Off” song & music video has a theme on identity that we can all relate to, no matter how cheesy the lyrics.

Let’s face it, you’ll sing the lyrics and bob your head no matter how cheesy the song is because it’s catchy. Some people don’t like that she’s going pop. That’s cool, though she was always kinda pop, I did prefer her country influences of earlier albums. Some people say that it’s racist. Well, I don’t really see that at all, and you have to be looking through a biased lens to see it. But then again, if you’re used to seeing racism in everything, you’ll see it here, because after all, you tend to always find what you’re looking for.

Though not the most poetic of lyrics, they do have a message (along with the music video) that I think we all need to hear about identity. Here’s a snippet of some of the lyrics:

I love Taylor Swift’s songs, though I can’t really relate to all of them. I’ve never had a secretive love story romance because someone’s daddy told me to “Stay away from Juliet.” I’ve never been seduced by someone I knew was trouble. Occasionally I feel 22, but it doesn’t last very long. However, this is a song that I believe addresses issues of identity and self-worth in all of us. Here’s why:

Other People Do Things Differently and Better Than You. That’s Ok

The music video (which you can watch below) showcases a variety of dance groups, including ballet, break dancing, twerking, cheerleading, interpretive, and this crazy hand/finger thing. By the way, each dance style exhibits a variety of different races, which is why I can’t see how it can be racist. Anyways, the video shows dancers performing their own styles with a lot of skill, to which Taylor is awkwardly unable to match.

In life, people will be more skilled at certain things than you are, and that’s ok. We may think that’s a childish notion that we’re past already, but it’s really not. Do you envy or despise, even in the slightest, people at work who out-perform you or have higher titles than you? What about people who make more money than you? Or people in social settings who are more charismatic and outgoing than you? Do you ever look at someone and yearn for what they have, whether it be a better job, better car, better house, better family, etc…

Do you ever feel as though your value to others is validated through the quality of your performance? That sometimes you’re just not enough? Well, this music video of dance performances has an underlying message – that other people will out-perform you, but that doesn’t mean you’re less valuable, because your worth as a human being doesn’t come from what you do – it’s intrinsic to who you are.

You May Not Fit In and Be Criticized. That’s Ok

As the video showcases different dance groups, Taylor is trying to imitate them and fit in, but gets confused and frustrated. Her lyrics also hint at people criticizing her for her style. Though the thought of trying to fit in may seem juvenile, it’s what we do in every aspect of our lives.

You go along with the policies and procedures of your work though you may not agree with them. You adapt to the social activities and lifestyles of your friends, though you may not really enjoy them. You accept your current relationship, job, location, or lifestyle when it doesn’t give you life, just because it’s easy, comfortable and what you’re expected to do.

Veering from these may make you stand out and possibly criticized. Maybe not to the point of direct criticism, but you’ll lose being accepted and desired by your social circles. That’s what all of us want though – to be known and accepted, to feel like we belong somewhere. Could that come at the cost of who we have the potential to become?

You May Do Things That Uniquely Don’t Match Any Kind of Norm. That’s Great

The music video ends with Taylor rocking out to her own dance style and enjoying it. You were designed with specific preferences, traits, personality, passions, and talents. Others will do what they are great at and enjoy it. That’s ok, but envy and imitation will only make you a poor copy.

I fully believe that you were created uniquely for this world – that you were born into your time and your place for a reason. Now it may not be ideal, but it shapes you. And that experience, combined with who you are, what you love, and what you’re good at, is intended for you to live a life the influences the people around you for the good. You have something valuable to offer to this world, something that it needs and would be a little more empty without. You’ve been flung into this moment in history to impact it in a way that only you can. Don’t waste it trying to play someone else’s role.

If you feel like you’re constantly failing and not matching up to people’s expectations, TSwift has some news for you. Don’t. Dance to the beat of your own music and make your life the best song it can be – the part that only you could play.

“Today you are You, that is truer than true. There is no one alive who is Youer than You.” – Dr Seuss