I might have grown up in a post-war environment and been one of the 100,000 people killed from undetonated landmines. I might have struggled under a repressive government.

But I didn’t. It’s all because of the sacrifice of others on my part. I am in the top 1% of the richest people in the world.

And I don’t deserve any of it.

I am a refugee from Vietnam

I recently had the opportunity to learn a little more about what it actually cost for me to enjoy the life I have right now.

With massive casualties, anti-war sentiment, and no end in sight, the US withdrew troops in 1973 and South Vietnam fell to the Communists in 1975.

A young teenager who risked her life 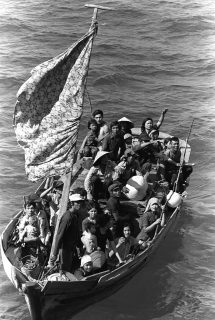 In the few years after the war ended, about 800,000 people fled Vietnam by boat. Hundreds of thousands died at sea. Those who survived ended up in refugee camps in islands in Southeast Asia. They were stuck there for months to years living in harsh conditions, just trying to survive day to day. (sound familiar to anything happening today?)

But for them, the hardship and risk of death was better than living under the oppression of Communism.

My aunt was one of them. And I am forever grateful for the extreme risks that she had to take.

An American couple who gave generously

During this time, the US was accepting Vietnamese immigrants, given that they had American citizens to sponsor them. A young couple in New York decided to answer this call.

They had no idea who would end up living with them. They already had a child to take care of with another one on the way. They weren’t obligated to do anything. But they did.

Because of their generosity, my aunt was able to leave the refugee camp and come to the United States to live with this couple. I am forever grateful for how much they gave.

A government that welcomed foreigners

Since the end of the Vietnam War, the U.S has taken in approximately 1.3 million immigrants from Vietnam.

Contrary to popular belief, the US immigration and citizenship process is one of the most difficult in the world. And contrary to idiotic statements like “we’re letting these people in and we don’t even know who they are,” the U.S. knows a whole lot about who they are and makes it very difficult for them to come in.

Over the next 10 years, my aunt went through the grueling legal process of trying to sponsor myself and my family to come to the United States. It was costly and burdensome for her, and she didn’t have to do it. But she did.

Once in the U.S., the path to citizenship was also a difficult one over the next several years. The pinnacle of that process was the citizenship test, which consisted of a hundred questions to learn (only 5 would be asked). I remember staying up late at night quizzing my mom to help her pass the test.

Despite the flaws in our system, I am forever grateful for a government that takes in immigrants, for the soldiers and civil servants who fought to secure that freedom, and for the Americans that welcomed me without prejudice.

A mother who sacrificed her future

Due to the legal complications of the immigration system, my dad had to stay back in Vietnam. The hope was that my mother would be able to sponsor him later on. Just 6 months after we arrived, my dad died in Vietnam.

My mother was left to raise a 4-year-old in a new country, learn a new language, learn a new culture, work part-time during the day and take college classes at night.

Due to unfortunate circumstances, she had to quit school so she could work full-time and support both of us. Since then, she has worked long and hard hours to raise me and put me through college as a single mom.

She forfeited her own future so that I could have shot to create my own. And I am forever grateful to her for all the years she sacrificed for me.

I don’t deserve anything I have

I have a college degree, a steady job, a comfortable home in Southern California, and a wonderful marriage. And I don’t deserve any of it.

A lot of people sacrificed a lot for me to be here. I got extremely lucky. Sure, I worked hard in school and work to get to where I am. But I did nothing to get those opportunities. Other people did that for me. I didn’t deserve it.

But neither do you.

If you were born in the U.S. or any free and developed country, you’re extremely lucky. You didn’t do anything to deserve that.

You may pride yourself in the work that you did to get you the success that you have. But you did nothing to gain those opportunities. They were given to you from those who sacrificed before you.

And if you immigrated to the U.S. like me, you understand how much you have to be grateful for.

When it comes to poverty and immigration, we often have it backwards. We have this mentality that we worked and earned and deserve what we have, while others shouldn’t be given anything. Instead, we need to be reminded that we actually don’t deserve what we have, but have the chance to extend grace to others who deserve to have an opportunity at a better life.

I’m an American, and this is the America I know

I’m a refugee from Vietnam, but I’m as American as they come.

I grew up playing little league. I was in marching band and water polo. I played guitar in a punk rock band. I graduated from college. I worked for city government. I voted in local and national elections. I volunteered. I paid my taxes.

My family worked their asses off achieve the American dream, to build a better life for their children. We embodied American values. Among immigrants, we’re not the exception. We’re actually the norm.

The America I was introduced to when I came over was one of hope and hospitality. It was the country that welcomed me as an immigrant. It was the society that integrated me with its own. It was the people who sacrificed so that foreigners who were not part of them could one day be one of them.

It was the America in which playing backyard football with my caucasian, latino, and African American friends was a normal Saturday afternoon.

This is the America we need to be

Raising suspicion and blame on groups of people other than your own isn’t American. That’s closer to Communism, Fascism, and radicalism. It’s the very thing that immigrants are fleeing in hopes that America would be different.

Freedom and security don’t come from fear and bigotry. They come from courage and compassion. It was immigrants and the citizens who welcomed them that built the strength of this nation.

[bctt tweet=”Freedom and security don’t come from fear and bigotry. They come from courage and compassion.” username=”stevenlma”]

I’m an American. I hope I’ve made a positive contribution to my community and nation. As an American, I’m grateful for the sacrifices others made on my behalf, and aware of the responsibility I have to influence the culture and course of this nation.

When immigrants are shown acceptance and compassion, they become devoted Americans who want to contribute and be a part of their new country. Believe me, I know.

Steven Ma 2020. Just kidding. As an immigrant I’m not eligible, but I’m fine with that.

* If you’re looking to get more involved in helping immigrants, the International Rescue Committee is a great place to start.