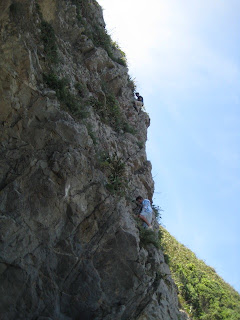 My friends and I went to a nude beach. Ok, it’s not what you think. Only old naked men go there. Well, that sounds a little worse. There’s kind of a nude section and a clothed section, and we stayed in the clothed section, but could see all the people on the other side. Ugghhh. But we really went there because it was a nice beach that was sheltered from the wind. Really.

Behind the beach was this huge cliff. The rocks looked climbable, so my friend Dan and I decided to give it a go. I was doing pretty good, got up to maybe 30 feet, when I grabbed a rock and it came loose and went tumbling down. I then realized that the section I was on was cracked and almost everything was loose. I seriously had a moment of intense panic and stayed frozen for like 10 minutes. Dan finally caught up to me and I was super relieved, cause I had no idea where to go. So I followed him as he kept climbing up through bushes. It was a lot safer than rocks cause you have stuff to grab on to, but it gave me way too many cuts. There were many times when I was thinking (and apparently so was Dan) what would happen if I just got stuck and they had to helicopter me out of there. We were probably climbing for 45 minutes, because just when we thought we had reached the top, the cliff just got steeper.

When we finally got close to the top, there was this old guy in a little clearing with a telescope. At first it seemed like he was sightseeing, cause it was a nice view of the bay from there, but his telescope was pointing down at the beach. As he began talking, I realized why. He said stuff like, “You know what this beach is? It’s a nude beach!” and “There was guy with a great fanny, but he left a few minutes ago.” He also said to Dan, “That guy down there has some really big tits!” Needless to say, it was a really awkward conversation and we got out of there fast. 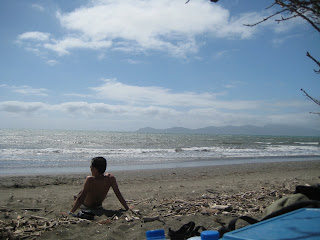 Another day, my classmates and I went up the coast a little to visit a friend. We spent the day at the beach and just hung out. We ended up playing like a two-hour game of volleyball. It was probably the most fun I’ve had all year. Oh and I also drove the first and only time in New Zealand. It actually didn’t really count, cause it was on a one way street through a park, not even on a real road. But it was still fun. The remainder of my New Zealand summer was spent eating out, working on my thesis, playing cards, watching movies, playing hide and go seek, and just pretty much enjoying being lazy and unemployed.

I’ve also been checking the weather report in Fiji like 5 times a day (it’s one of the destinations on my mini-vacation). If you don’t know, they just had a massive cyclone last week that flooded the whole country. The airport was temporarily closed, tourists were stranded, roads were closed and 9 people died. It was said to be the worst flooding in a generation. So far, it looks like there will only be light rain when I pass through. I emailed the place I would be staying at to check the conditions, since a lot of hotels were flooded and ran out of food. The response I got was classic. “We are looking at blue skies and sunshine and the bad weather has moved away. We only experienced flooding, which is the worst we have ever seen, otherwise all is fine.” Hmmmm….well, other than the worst flooding ever, seems like everything’s alright. I think someone’s lying. Oh well, I’m still planning to go through anyway, so we’ll see what happens.

So now I am in Vanuatu, and it is soooo freakin’ awesome!!! Beaches, waterfalls, jungles, ahhh!!! I will post another blog in a few days when I’m done. Well, hope you’re all having half as much fun as I am (probably not, but I do hope for it). 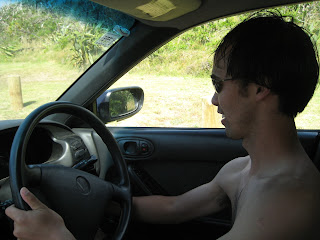 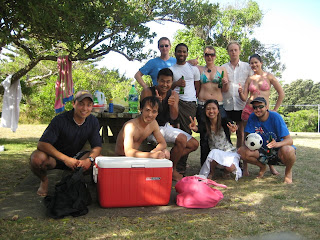