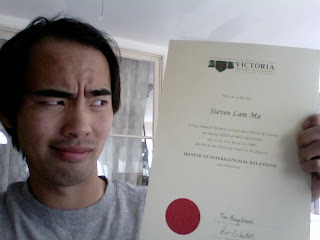 I finally received my Master’s degree, and to my surprise, it’s not that impressive. The document looks kinda…plain. It’s in basic Times New Roman font, italicized. Most degrees have it in fancy Old English font. And the university’s name is really small at the top with a little logo next to it. Usually the school name is the biggest thing on the degree. My high school diploma looks nicer. Seriously. This master’s just looks like a junior high ‘Student of the Month’ award. Check out these pictures for comparisons: 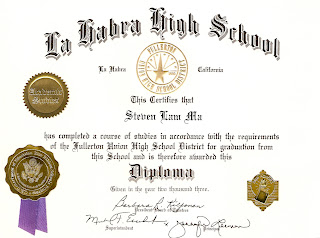 My B.A. from Biola 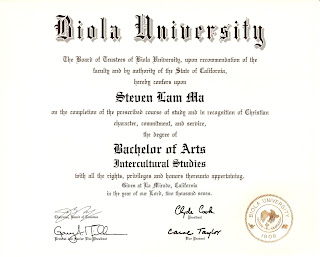 My M.A. from Victoria 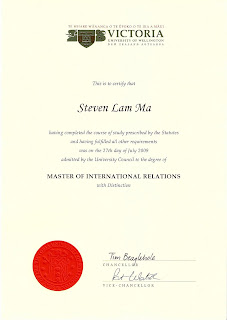 It seems like they just get more boring as you go up. Oh well, I should stop complaining and be grateful for what it represents.

I did far better on my thesis than I had expected though. You get two people to grade it – someone from inside the school and someone from another school. I got an A+ from internal and an A from external. The higher one trumps, so my grade is an A+. Not too shabby for finishing it a day before it was due and having no one review. I even got a spiffy little award for it. So, I thought it may be worth sharing, if you’re bored or need toilet reading material. It’s about 30 pages or so single-spaced on the post-election violence in Kenya during January 2008. Here’s the abstract:

FROM TENSION TO VIOLENCE:
Identities and Perceptions in Kenya’s Post Election Conflict

The hopes of African democracy enshrined in Kenya’s 2007 presidential election fell apart when alleged rigging of the votes caused mass rioting across the nation. Previously assumed to be the most stable state in East Africa, both Kenyans and the international community were shocked at the month-long violence that ensued. Traditional theories of ethnic, political and socio-economic conflict emerged in an attempt to understand and explain the root causes of violence. However, these approaches fail to account for the variations in the motives of violence as well as the time frame in which it occurred. This paper seeks to establish a proper framework to analyse violent conflict based on constructivist approaches. I will demonstrate the role of identities and perceptions in shaping motivations for conflict. Each individual possesses multiple identities that frame their perception of the world. These perceptions are reproduced through everyday social discourses and define boundaries of normative and rational action. However, given a shock to the social environment, such as a rigged election, perceptions can be shifted in such a way that threats are created and exaggerated, therefore warranting previously abnormal actions, such as violence, to be perfectly rational within the new context.

P.S. In the market for a cheap degree? I can Photoshop your name onto these and sell them to you at a discounted price. Any takers?