As the political landscape gets more heated and divided, aren’t you tired of all the pointless Facebook arguments and the gridlock that happens in Washington DC?

At one point, we thought that being good citizens and being politically active meant sharing our opinions online.

It’s a great concept. Rather than just listening to what the news told us to believe, we could listen to each other. We could go online and talk and connect with anyone to discuss political topics. We would get other points of view, move towards a common agreement, and influence our politicians to act on our behalf.

So much for that dream.

We’ve all seen how ugly the internet can get. Our emotions get the best of us, and we berate and degrade each other, attack and accuse each, and type profanities and ALL CAPS ALL THE TIME.

We’re tired, frustrated, angry, discouraged, and disgusted. All the while, we’re not better people and no one has changed their mind. Rather than bring us all to become a better society, the internet has revealed the how ugly we can be.

What makes this worse is that none of our bickering on social media has an effect on the politicians who make decisions that affect our lives.

What if we could turn all that negative late-night typing energy into a positive outlet for real impact? 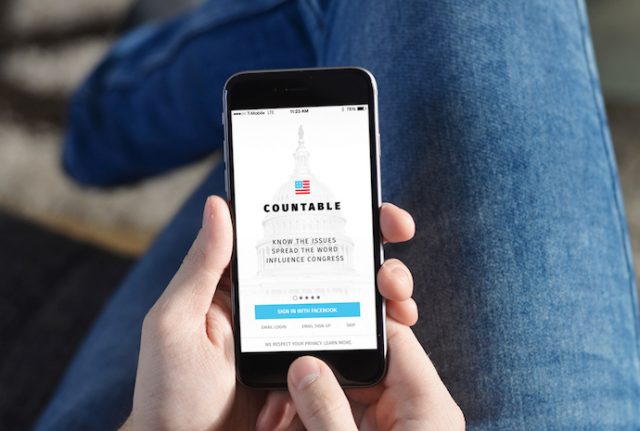 That’s what a lot of new startups are trying to do, and one of the best I’ve found is Countable. Countable is an app that lets you see what Congress is voting on and make your voice known to them. Here’s what you can do:

Know What Issues Are Discussed and Passed 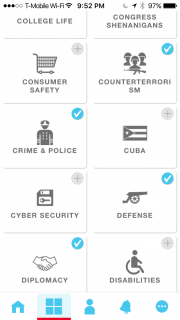 When it comes to politics, we tend to focus on the main dividing issues and scandals that are trending in the news.

However, Congress passes bills almost everyday. Those are new laws being written that will directly impact our lives, but that we’re completely unaware of. It can also be overwhelming to see all the bills and go through them.

Countable simplified the process and delivers what matters most to you.

When you first create an account, you can choose which topics you care about, and Countable will only deliver bills that fall under those categories.

For example, I selected California, Humanitarian Aid, Refugee Crisis, and Environment as some of the dozen or so categories I chose to be notified about.

When it notifies you of a bill coming up, it provides a short paragraph describing the bill so you can quickly and easily understand it.

Join in the Discussion Over Issues 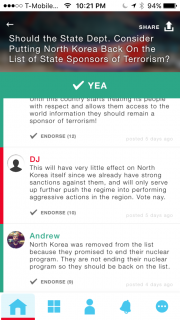 You probably know by now that social media arguments are pointless. No one’s mind gets changed from a convincing tweet. Instead, we look for opinions that affirms our beliefs while digging our heels in deeper against opinions that contradict our beliefs.

Related Read: 5 Reasons Why You Need Friends Who Disagree With You

Rather than gaining a broader perspective from different viewpoints, we become narrower, more malicious, and just plain stupider in our arguments.

With each bill, you can view a concise description of the argument for and against the bill, so you can get a clear perspective of it. You can then scroll through the comments and opinions of other users. You then have the option to vote Yay or Nay on the bill and add your opinion, which then gets added to the comment feed.

I’ll be honest, because it’s the internet, you’ll still run into a lot of ignorant and stupid comments in the app. But I have noticed that you will see a higher number of fairly well-informed and insightful comments on Countable. 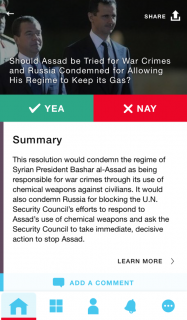 Your elected officials are supposed to represent you in how they create and vote on new laws. Their reelection hinges on how satisfied you are with their performance to vote for them again. So it’s effective to let your representatives know your views and pressure them into acting accordingly.

But it can be hard to know how to contact your representative. And let’s be honest, many of us don’t even know who they are.

Countable helps you out here. All you have to do is enter your address, and Countable tells you who your Congressman and 2 Senators are, including their emails, phone numbers, and even social media profiles.

Every time you vote on a bill, Countable will automatically send that vote to your representatives for you. Keeping your legislators accountable couldn’t be any easier.

Get Personal With Your Elected Members of Congress 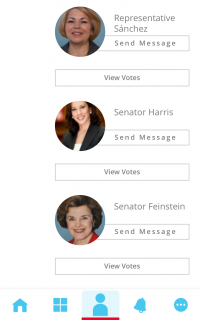 When your congressman is all the way in Washington D.C., it can be easy feel disconnected. To think about it, we’re pretty disconnected from all of our elected officials, even down to the local level. Have you ever seen your city council member or Mayor, or even know who they are?

Countable connects you to your elected official like the annoying BFF that won’t shut up. Right after you vote on a bill, you’re given the option to record a video message of your reason why, and countable will send it to your representative for you.

I tried it and got an email response the very next day. Of course, I doubt it was directly from my senator – it was most likely one of her staff that monitors all incoming requests, but those requests will get relayed to her.

There’s No Excuse for No Civic Engagement

You could literally lie in bed and scroll through your phone like a Facebook newsfeed that is tailored to issues that matter to you. Tap on the bill and read a few sentences on what it’s about, then tap to make your opinion known. It’s easier and more productive than typing out that insult to your Facebook friend who you can’t believe is a conservative/liberal.

Got an extra 30 seconds? Right from bed, record your video about why this issue is important to you. In less time than it takes to capture that perfect Instagram selfie, you’ve directly influenced the decisions of people in our nation’s halls of power.

You can get Countable on your browser, iOS or Android device. 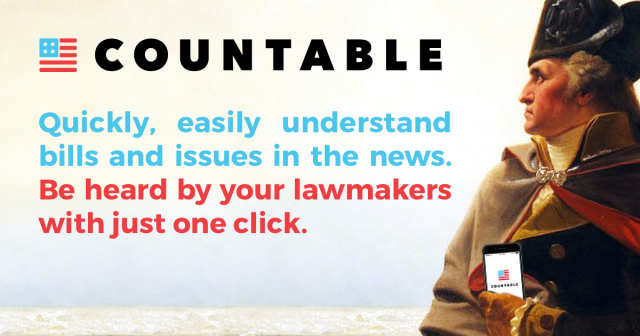