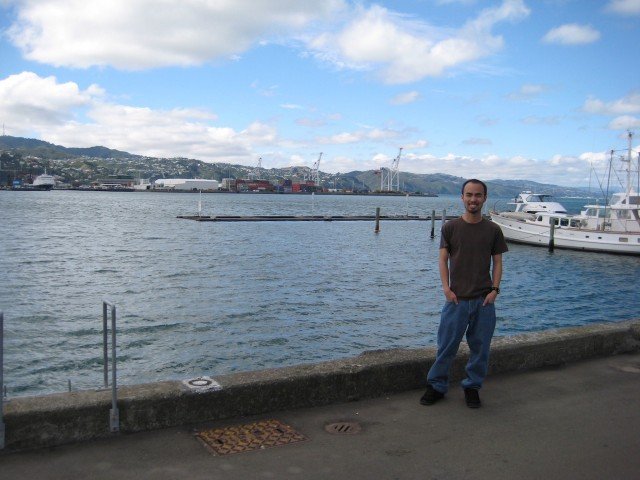 So it’s the next morning after I got here, and I’ve had a little more time to reflect on the events of the previous day. It was somewhat like my emotions were thrown in blender and the top came off.

Boarding the plane, I was really worried for my mom. This was the first time she cried when I left, and I’ve gone on trips to Africa a bunch already. I was really worried that she would get lonely, since I’m not just gone for a month, but a year, and it’s just her by herself. It was then that I started questioning whether or not I had made the right decision. But that’s kinda late…I’m already on a plane.

I puked towards the end of a 12-hour flight to Auckland, New Zealand. My plane was delayed, so I missed my connecting flight and had to board the next one 4 hours later. Oh, and that one was delayed too. So I arrived in Wellington at 3:30pm, instead of 10:00am. The airline lost my guitar, which also had some clothes and my towel in there.

The University people met me, but said the temporary accommodations were full, so they put me in a hostel for travelers. I had to share a small room with 5 other guys. I didn’t know where I was, didn’t know where the school was, and was given no direction on what to do next.

In short, I was just overwhelmed. I never felt so lost and helpless. At least in Africa, the people bent over backwards to make sure I had something to eat. So after my semi-emotional break-down and chat with God, I started doing what I could to get stuff together.

One of the people that had accommodations replied to my email, so I called him. Mike, the owner of the house, picked me up from the hostel and took me to the place to look around. He was a really nice and helpful guy, and the room was still available. It’s about 15 min drive from the school (45 min walk), but it’ll do. Hopefully I’ll move in today, if nothing opens up at the school.

Well, things are looking slightly brighter. I’m off to my orientation at school now. Please pray that all the little pieces just start falling in place: that I get permanent housing tonight, that they find my guitar, and that I can get established enough so I can just focus on school.

Thank you all of you who wrote in that blue journal book – the notes were so encouraging. Thank you for all your prayers and support. Thank you Jesus for being at my side, even when I don’t realize it.