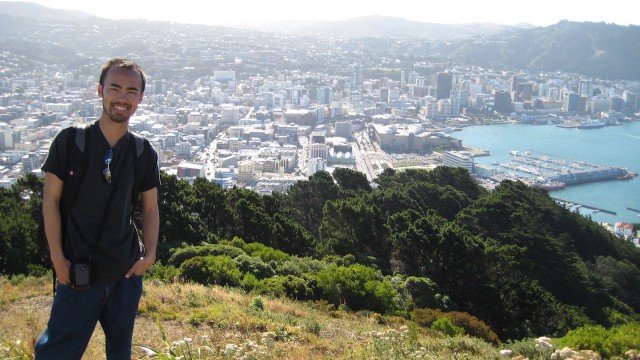 Over this past week before school started, I took my spare time walking around Wellington to get a feel for the city, as you can see in the videos posted. It’s also given me the freedom to reflect a lot. So beware, this will be a long one.

I’ve connected with Karori Baptist Church, and I think I’m going to settle there. It’s a little more traditional and smaller than Faith, my church in the states, but there was a huge factor that attracted me: their inclusiveness. My first Sunday there, a couple invited me to their home for lunch. Afterwards, they took me on a little afternoon hike through the bush. Another member of the church invited me to lunch during the week and showed me around the city. The worship director invited me to dinner, and then gave me some extra wool blankets for the winter and a bike to use for school. I was thoroughly overwhelmed by the amount of generosity I was shown. It takes a lot for me to just say hi to a new person at church. It made me wonder why they were so nice. Is it just a culture thing in New Zealand? Were they overexerting themselves just because I was new to the country? Or could it have something to do with them actually having Christ live through them? Is it possible that this community is so filled with the love of God that they are able to truly love their neighbor, effortlessly? Maybe this is what Jesus intended for the church to be, and why it grew so fast in Acts. I don’t know, but it’s something worth going back for.

As I was walking to my first class on Monday, I started questioning again my reason for being there. I’m paying $20,000 to go to school, and another $8,000 just to live here. All for what? A little more head knowledge about how screwed up the world is and a piece of paper that says I know it. Then I’ll spend the next several years paying it off. Will this “investment” really impact the world more in the long run? I just keep thinking of how much it could do immediately; the number of kids it could sponsor, the number of water projects it could fund, the amount humanitarian aid it could bring, the number of years it could support a missionary…etc. I could gain so more more wisdom by taking the same amount of time and less money to just go there and start doing it. And really, say it does pay off and I go and change the world for better. How much good would that really do? I help a handful of people while the rest of the million other problems plague the world. In all honesty, isn’t it all in vain? As much as I work and pray, it won’t get any better. There will always be war. There will always be pain. There will always be poverty. This is said both Biblically and realistically. I know the whole starfish story, of how it “matters to that one.” But in the whole course of history, and the billions of people that exist, what do a few really matter? I sometimes wonder why I grew up in the life that I did, and why some other kid grew up in the midst of a civil war, starving, with AIDS, and sold into prostitution.

On a lighter note, I finally got to class, although slightly depressed after contemplating all this. We had this “meet & greet” orientation a couple hours before class started. So as we’re sitting in the room waiting for it to start, the professor and head of the faculty walks in carrying all these cases of wine and dumps it on the table. Then he brings in boxes of really good pizza. So we basically eat, drink and socialize for the next 2 hours. When it’s time for class to start, he passes the wine bottles and cups around as he’s lecturing. Total culture shock. Even though I don’t really like the taste of wine, I just couldn’t resist. When am I going to drink wine in class again? Ever?

There were about 20 people in my class, mostly in there late 20’s or 30’s. Some were like 60. As little discussions turned into debates, I realized that people are the same everywhere. They don’t know how to argue. A lot of them are really smart, but they argue from their emotions and assume that they’re the one person who gets it and everyone else’s opinion is invalid. Obviously, there were a lot of anti-American and anti-Christian sentiments. For the most part, I remained silent just to get a better perspective of the dynamics of the class. It’s definitely a change from Biola.

So some prayer requests:

If you actually read through all the randomness and got to the end, I am quite impressed. Thank you so much. I owe you a hug when I get back. And possible a lunch.