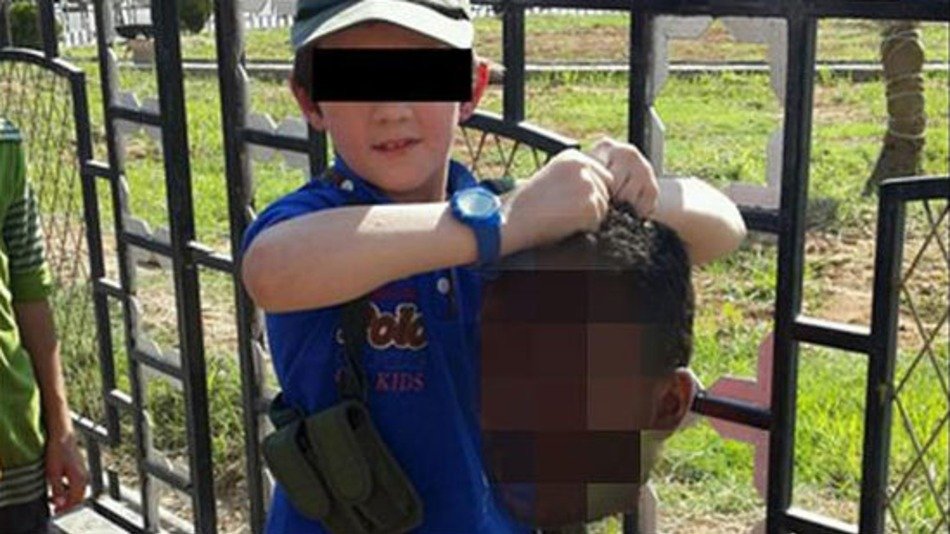 You may have seen in the news the disturbing image of a 7-year-old boy proudly holding a decapitated head. It’s horrific, disgusting, and tragic. And it’s our fault that we’ve allowed this.

If you don’t know the story, you can read it here. In short, this photo was taken and posted by Khaled Sharrouf, an Australian convict who fled to Syria to join the terrorist militia ISIS / ISIL. He took his 3 children with him. He posted this picture of his son on Twitter (which has been removed) with the caption “That’s my boy.”

This is blatantly wrong and disgusting on so many levels. No child should have to go through war, much less participate in it. Yet this is one incident of what happens to millions of children all over the world on a daily basis, children who are stripped of their innocence and humanity. And it’s our fault.

Am I My Brother’s Keeper?

Yes, it’s a really sad story, but what does it have to do with me? That’s the type of question that creates this type of world. The question of whether or not the plight of someone else is of consequence to you creates the condition for a world in which evil is allowed to grow without restraint. We share the same world, and therefore the actions and consequences of people, whether they be your next door neighbor or someone on the other side of the world, does have an impact on you and those around you. It’s ludicrous to think that the horrific acts that occur in one society will not send ripples into other societies.

This man is a horrible human being and a horrible father. As a sad result of his actions, his kids, without intervention, will most likely grow up to be horrible human beings who will hurt other people. Yet it wasn’t your responsibility, because you didn’t know them. But was it someone else’s? If they were your neighbors, what role would you have played?

What role do you play in the lives of those around you now?

This isn’t a call to start spying on your neighbors and play ‘Who might be a terrorist?’ But this is a question about the responsibility we have for those within our influence.

For the most part, we live in culture of tolerance. You have your preferences, I have my preferences, and we respect each other for it. Along with that, we live in a culture of privacy, where I don’t intrude into your personal life, and you don’t intrude into mine. But we also live in a culture of mutually agreed upon moral standards. We get along because we agree that stealing and killing is bad, so we agree to not do those things, and punish those who do. It provides us with the freedom and security we want so we can live and enjoy life. But what happens when the lines between privacy and communal morality get blurred?

Atrocities don’t just happen over night. They are cultivated over a lifetime. Murder starts with hatred. Sex trafficking starts with pornography. Small habits, reinforced and compounded over time, turn into large actions that have significant consequences. This father had a violent childhood, which explains the choices of his adult life and now unfortunate path imposed upon his children. If you could’ve intervened, would you? At what point does the pedestal of individual privacy need to give way to the shared responsibility of keeping each from going down destructive paths? Would you sacrifice your own privacy for others to intervene in your life?

Let’s face it, some people are awful parents. This story is a prime example. Parenting is an honor and a privilege which many abuse. I may be against popular opinion on this one, but sex does not give you the right to raise a child. Being a parent is earned. If you suck as a parent and abuse your kids, they should be taken away from you. They deserve better than you. This boy deserved better than his father. But that’s a whole other topic.

The point is that the freedoms and securities we enjoy are not the result of laws or government. They are the result of people. You and me. People who choose to abide by community standards that benefit society because of the values we hold. Values which were taught to us by our family, friends and community. The benefits you enjoy were the result of other people who, to put it frankly, gave a damn.

A moral and just society requires its citizens to teach and correct each other on what is good and not good. And this is crossing into controversial territory, but that requires you to know and care about the lives of your friends, neighbors and community, and how they treat their families. Sure, you may say that how someone raises their kid or treats their spouse is none of your business nor your burden. But if they raise that kid to be a jerk who turns into a horrible adult that harms other people and creates a dangerous world – a world that your children will grow up in – are you ok with that?

Those who are in your sphere of influence – your family, friends, neighbors, coworkers – love them. Be patient with them. Be kind with them. Root for them. Encourage them. Protect them. Celebrate their achievements, carry their burdens, and cry with them in their pain.

Earn the right to speak into their lives. Not so you can judge them. But so you can help them in their weaknesses and their flaws. So that you can curb them from going down a path of destruction, and nudge them towards decisions that benefit themselves and others. So that you can help them become a better person, and in turn, help create a better society. Open your life for others to do the same for you.

This boy deserved a better childhood and a better future. He deserved a community that should have invaded his family’s privacy with an intrusive love. When we fail to do that for those we do have contact with, we’ve failed him.